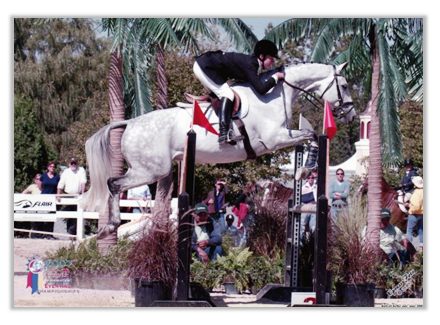 We’ve got some thrilling news at EcoLicious Equestrian.  We’re honored and super excited to become a sponsor of a talented young three day eventer Lauren Kieffer from the O’Connor eventing team. Why Lauren? She understands the importance of making sustainable  & environmentally friendly choices and avoiding toxins and chemicals that conventional equine grooming products contain.

So who’s Lauren, where does she come from and what is she up to?

Lauren was born and raised in Mt. Carmel, Illinois. She fell in love with horses and began riding at the young age of six. She competed in several local hunter/jumper and 4-H shows before pursuing eventing at the age of 12, training at Susannah Lansdale’s barn in Evansville, Indiana.

Lauren fell in love with eventing and started training with Karen and David O’Connor started in 2005 when her parents signed her up for the O’Connor Eventing Camp in Virginia. She then took up a working student position with them and then became their Resident Rider in 2008. For you who aren’t that familiar with the three day eventing scene Karen and David O’Connor are the IT and their numerable accomplishments include medals from Olympic Games in Atlanta and Sydney! Karen has been named US Female Equestrian Athlete of the Year ten times and, in 1993, was the number one ranked lady rider in the world. She received the Team Silver Medal at the Atlanta Olympics, riding Biko, and the Team Bronze Medal at the Sydney Olympics, aboard Prince Panache. David brought home the first eventing Gold Medal for the United States in more than a quarter of a century, when he clinched the individual eventing championship on Custom Made at the 2000 Olympic Games in Sydney with the best score in Olympic history. Alongside Karen, he and Giltedge helped the USET capture the Team Bronze Medal in Sydney, and the Team Silver in Atlanta.

And now back to Lauren. Here are some of her most notable achievements. Lauren has been named to the Developing Rider’s List every year since 2006 and was placed on the USEF B-List in 2009 after her top placing at the Jersey Fresh CCI***.  She also received the Markham Trophy the spring of 2007.  The trophy is given to the highest placed rider under the age of 21 at the USEF CCI*** Spring Championship.  She has many top placings in horse trials and FEI competitions, most recently completing the 2010 Rolex Kentucky CCI****.

Lauren is well known for her success with a variety of horses and for her natural approach in all her training techniques.

We asked Lauren to tell us a bit about her equine partners. She trains and competes about 15 horses, but according to her the two guys below are the most notable ones:

Ultra Tim 10 year old bay Thoroughbred gelding :Named to Developing List 2010; 2nd Plantation Field CIC** 2009; Top 15 at Fairhill International CCI** 2009; Top 10 Millbrook HT Adv 2010.
Ride Green!We’ll be keeping you in the loop about Lauren and her accomplishments, so make sure to sign up for our blog!

Check out our full line of delicious, natural and green equine care & grooming products at www.ecoliciousequestrian.com