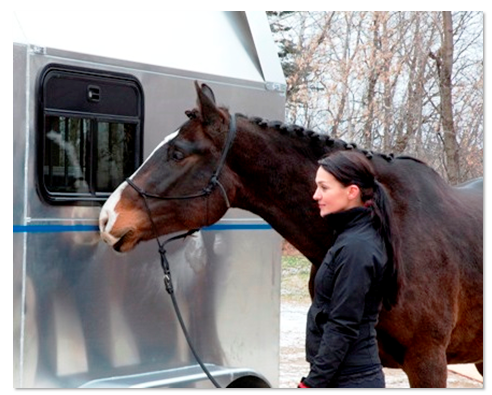 Recently I was asked to model (along with my beloved steed Guinness) for Herd Products, as they prepare to launch a new line of horse trailers.  Naturally, I jumped at the chance!  To think my Guinny could potentially end up as the poster child for a new line of horse trailers!  I can see it now, Guinny’s face plastered across two page spreads in magazines and all over the Internet!  Before I know it we’ll be ducking Paparazzi just to get a practice ride in!  He’ll never be able to leave the paddock in sweatpants again!  Well…maybe I shouldn’t get too carried away….

The photo shoot was scheduled to take place on November 18th at Superior Equestrian Centre in Oakbank. For those of you who don’t live in Mani-snow-ba, you may not appreciate that doing anything outdoors before June or after September can be dicey.  In fact, a true Manitoban knows we don’t really have summer here – just three or four months of bad tobogganing!  I digress…it was approximately –20 with the wind chill and flurries were expected within the hour.  We had to move quickly if we wanted to get any useable shots (those being the ones where I’m not channeling my inner Rudolph!)

I arrived at the barn at 9:00AM (decked out in all my winter gear) and went to get Guinny from the field.  Initially he didn’t’ seem sure losing valuable playtime with his buddies was worth it, but before I could crinkle the plastic on the bag of carrots, my boy appeared (and practically dragged me to the barn!)  I don’t call him “Guinny Pig” for nothing folks…that horse would work the camera himself for a carrot!

With time being limited before the shoot, I immediately began the process of doing a modified Red Carpet Makeover. I don’t have a wash stall so I nixed the bath and used a warm, damp towel with a little Squeaky Green & Clean Shampoo to get the stains out. Just a quick lather & rinse and his socks were nearly as white as my polo wraps!  I then applied a generous dollop of De-Stress Intensive Treatment to his tail before finger combing and brushing it out.  I used In Control Mane Setting & Braiding Cream to braid his mane in record time before wrapping his legs.  A little Glossy Coat Enhancing Tonic on my sheepskin mitt finished the look and buffed Guinny’s fuzzy fall coat to a high sheen.  Since I’ve only had Guinny for a few weeks, it was a real treat to see him turned out. He certainly looked the part of a show horse!

Now it was time for me to get cleaned up and ready for the shoot.  I had already done my hair and makeup at home (and said a little prayer for it to last out in the elements) so essentially I just needed to change.  As I mentioned earlier, this was a “fall” shoot, so on went the lightweight breeches, tall leather boots, a turtleneck and a light (emphasis on light) jacket.  I decided to refresh the hot packs in my boots (and put a pair in my mitts for good measure) before heading outside.

The creative for the photo shoot was loosely based around unloading horses in the fall, with the inference that we could be going to or from a horse show.  Guinness was to be decked out in show attire, while the second horse, Taurus (owned by Nachelle Forde), was to be left ‘au natural.’   It was exciting but I couldn’t shake this sinking feeling that turning into a Megsicle was in my not so distant future!

Our first location was on the lane where we did some mock loading shots.  Guinny was a good sport, illustrating just how far a horse of his stature can reach his neck into the trailer without actually setting foot inside! Luckily Taurus was a trooper, being the first one to brave entering the prototype.  It was a nice contrast to have Guinny and Taurus loading – Taurus is a refined 15 hands (on his tippy-toes) while Guinness is a stout 17+ hands (and weighs in at over 1300lbs.)

Next we moved out to a meadow where we did some casual shots in front of the trailer grazing.
Guinny and I got to pose with some deluxe 2011 SUV’s brought in from local dealerships for the shoot. We stayed in the meadow for just over an hour while they setup shots and rotated vehicles.  Although it was cold, Guinny was a trooper and a real natural in front of the camera. I on the other hand was entering rigor mortis and was given direction to look more relaxed (also known as less stiff.)   That said, I took my critique gracefully (a real model never complains, right Tyra?)

Guinny and I had a short break so they could get some static shots before we setup at our next location. Guinny had a few minutes to eat in the stall while I threw on my winter clothes and cranked the heat in my car.  I have never been flexible (or coordinated…who am I kidding here?) but cold is a great motivator.  I was somehow tenuously balanced on the seat with arms and legs in the air, rotating appendages with deadly precision from one vent to another for maximum heat absorption.   To the crew, I must have looked crazy, but in my defense, I don’t think they really appreciated that leather boots lack the substance to sustain a wimpy twenty-something with poor circulation.  And for the record, my feet still get cold just thinking about the photo shoot.

Once I was moderately defrosted, we moved to our third and final location in front of the barn, where
we did a series of shots leading past the trailer.  The mirrored finish of the trailer really caught Guinny’s attention and the photographer ended the day with some great shots that weren’t part of the original creative.  Thank goodness I own a horse that loves to stare at his reflection.  For those who knew me as a child, you may say this is very apropos. Luckily I have outgrown spending hours in front of the mirror singing into my hairbrush – I now lip sync into my spatula (in less blatantly reflective surfaces like the glass on the microwave door.)

All jokes about lip-syncing and rigor mortis aside, the shoot went really well and Guinny was a hit with the crew.  They all couldn’t get over what a gentle giant he is (and I couldn’t help but agree – how I love him!)   For now our budding career as professional models is on ice (literally) but we may be doing another shoot with Herd in the spring.  In the meantime I will patiently await our big debut (and keep one eye out for Paparazzi…just in case!)

Naturally yours until next time,

Check out our full line of delicious, natural and green equine care & grooming products at www.ecoliciousequestrian.com