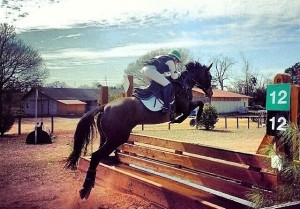 New EcoLicious Brand Ambassador : Emily aka the Little One

Excited to introduce another EcoLicious  Ambassador,  Emily aka the Little One, in her own words :

My name is Emily Przyborowski and I’m a new ambassador for Ecolicious Equestrian! I’m an eventer from Area 2, but I compete and groom all over the east coast, and this year hopefully abroad! I’ve been riding since I was five years old and started competing and joined pony club when I was six. From the start I had an incredibly supportive mother, who gave up being a stay at home mom to become a riding instructor so we could afford to have horses.

After years of failed jumper shows my mom let me ride a resale project/ failure as a school pony she had named “Dobbin”. Dobbin took me from afraid to jump a cross rail to winning 3’3 jumper shows within two months, and that was just the beginning. We eventually made our debut onto the recognized eventing world, and not much later I started working for Kate Chadderton, an international event rider based at the barn next door, for the summer. This is where my famous nickname “Little One” came from, because she couldn’t remember my name so she just made up a nickname, and it just stuck.

“Sasha” my current horse is a 15’3 hand dark bay OTTB, who had competed at the preliminary level. The thing I loved most about her is her jump, and I bought her right on the spot. In the few months we have been together Sasha and I have gone from placing 8th in beginner novice, to our most recent event placing second n the training level. A great improvement! I’m hoping to move up to the preliminary level this year with Sasha (or “Snash” as we call her when she’s being naughty or mareish) and eventually take her advanced.

For the longest time I had struggled to find grooming products that both work, and don’t irritate the skin of some of the more sensitive horses in the barn, like Sasha. But Ecolicious is all natural, and gets the clean, without irritation, while protecting the environment. Because if we have no environment, then where would we ride? I decided to become an ambassador for Ecolicious because I believe in their brand and their mission!”

Thanks Little One & all the best this show season!